The Pillar Award recognizes individuals within our community who have demonstrated unique acts that actively build and nurture one of the six pillars of character:

TRUSTWORTHINESS    Be Honest. Be reliable. Do what you say you’ll do. Be loyal - stand by your family, friends and country.

RESPECT    Treat others the way you expect to be treated.  Be tolerant of differences.  Use good manners.

RESPONSIBILITY    Think before you act. Do what you are supposed to do. Be accountable for your choices.

FAIRNESS    Play by the rules.  Be open-minded.  Make decisions without favoritism or prejudice.

CARING    Be kind.   Forgive others.  Help people in need. 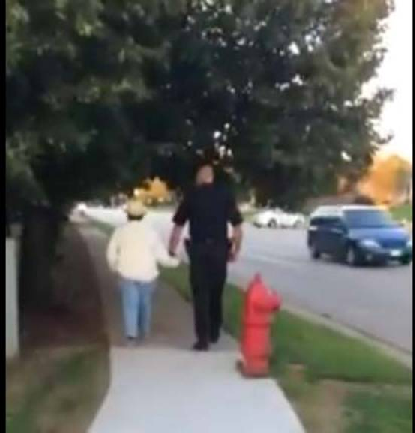 “On Friday evening the Bloomingdale Police Department responded to a call for a 21 year old mentally disabled individual that had wandered away from her home. Officers located her walking along the roadway. She was visibly scared and upset and would not come with the police. Officer [Michael] Giovenco was able to calm her down and she advised that she just wanted to walk the "trails". Officer Giovenco told her that he would walk the "trails" with her. She then agreed to walk back to her home, and Officer Giovenco held her hand the whole way, which really seemed to put her at ease. Another example of the excellent police work done by the members of the Bloomingdale Police Department. Nice Job Officer Giovenco!” 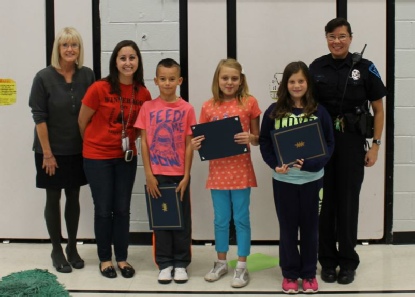 When the three students learned that their neighbor's four year old grandson was sick with cancer, they sold lemonade and handmade bracelets, (with supplies purchase from their allowance) to give the little guy a toy and a handmade card, followed up with several play visits.

In the words of the sick boy's grandma, who submitted the nomination: "These young children were so compassionate and caring it brought tears to my eyes. These kids met a challenge to see how they could make a difference to a young boy fighting a big battle. They gave of themselves and their time to bring smiles and friendship."   September 2014 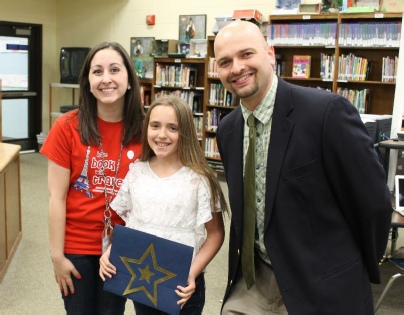 On Friday, May 2, 2014, the CHARACTER COUNTS! Coalition recognized Fiona Hull, a 5th grade student at Winnebago Elementary School with a Pillar Award for Caring, for standing up for a fellow student in her time of need.  Fiona is pictured to the right with her teacher Laura Reece and Principal Jon Pokora. 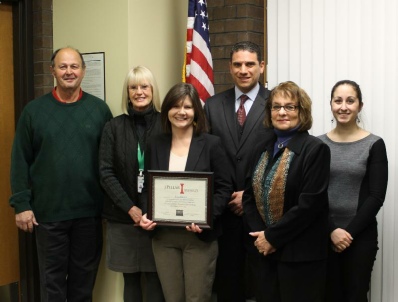 Lisa Palmer, the head of Youth Services, was presented with a Pillar Award for Caring by the Bloomingdale CHARACTER COUNTS! Coalition at the February 11th Library Board meeting. Last June, an 8 year old boy emerged from the library computer lab choking on a piece of candy. Lisa immediately jumped into action and administered the Heimlich Maneuver on the young patron. Lisa's swift action dislodged the breathing obstacle, and saved the young patron's life. Lisa's actions demonstrate the pillar of caring and the importance of first aid instruction and taking immediate action. 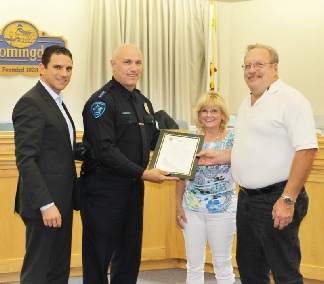 Residents Help Locate Missing Woman  At Monday's [August] Village Board meeting, Susan and Keith Boehne were recognized with a Citizen Award of Appreciation from the Bloomingdale Police Department and a Pillar Award for Caring from the Bloomingdale CHARACTER COUNTS! Coalition for their voluntary assistance in finding a missing elderly woman.  Last May the Bloomingdale Police Department received a report that an 86-year old female resident of a local assisted living facility, was missing. A search commenced immediately, including activation of the DuPage K-9 Unit, Cook County Police Helicopter Task Force, and a CodeRed message transmitted to area residents.

After receiving the CodeRed message, area residents Susan and  Battalion Chief Keith Boehne (Retired), formerly with the Bloomingdale Fire Protection District, responded on their own to help in the search. Fortunately, Susan and Keith soon found the elderly woman lying on the ground near a wooded area off of the 100 block of South Bloomingdale Rd. The Bloomingdale Fire Protection Dist. transported the woman to Adventist Glen Oaks Hospital, where she soon recovered after receiving some minor medical care, and was then returned safely to the assisted living facility. 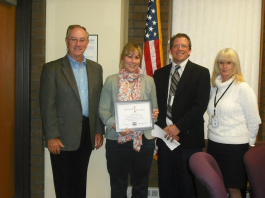 Shauna Porteus, head of the Bloomingdale Library business office, is the most recent recipient of a Bloomingdale CHARACTER COUNTS! Pillar award. On Sunday, August 14th, a day the National Weather Service issued a Rip-Tide warning for Lake Michigan, Shauna was walking her dog along Lake Michigan. She saw three youngsters in the water struggling against large waves. They were not supervised by adults and as the situation worsened, Shauna jumped into the water to help the youngsters. The water was very rough, but she kept going out until all three children were returned safely to the beach. On shore the Chicago Police and Fire personnel were there to help once the kids were rescued. Shauna herself was bruised and scraped from being bashed against the rocks.  Shauna was nominated for the honor by Library Director Tim Jarzemsky, saying "...Shauna's heroic actions out on Lake Michigan seem to me to be an extreme example of caring. Not once,, but three times she put herself at risk to help save strangers..."  Pictured (l to r) Mayor Bob Iden, Shauna Porteus, Library Director Tim Jarzemsky, and Kandy Jones, Bloomingdale CHARACTER COUNTS! Coalition. 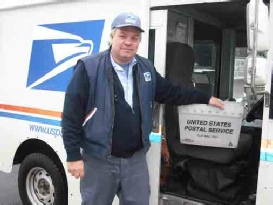 Those who know Bloomingdale Postal Carrier Daryl Miller are used to his quick smile, friendly manner and dependability. What they might not be aware of is his ability to handle an emergency with swift and decisive action. On November 29th, Daryl witnessed a driver traveling eastbound on Lake Street lose control of his vehicle, striking the side of Pickle Piano Company.  Without hesitation, Daryl ran to the vehicle, taking immediate action to help the driver as the car's engine was roaring and apparently stuck in gear. He was able to assist the driver, who had been taken ill, away from the car as emergency personnel arrived on the scene.  The Police Department commended Daryl for his swift action which contributed to this incident ending in a safe and positive manner.  Police Chief Frank Giammarese thanked Daryl stating, "It is a noble act to help another in a time of need."


Matt McAloon presented the award for Caring to Christopher Kalupa for his assistance to a victim at Lifetime on 12/26/10 before Paramedics arrived. 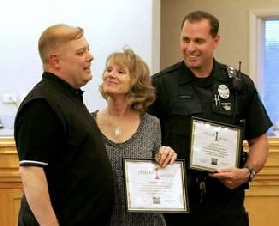 Pamela Ramsey of Naperville, center, and Bloomingdale police officer Steve Abruzzo, right, are honored with the Bloomingdale Character Counts! Coalition Pillar Award Monday night [4/26/10] at the village hall. They saved the life of Dwight Henricksen, left, of Columbus, Ohio, after he suffered a heart attack while visiting the Bloomingdale Golf Club.  Article:  http://www.dailyherald.com/story/?id=376333 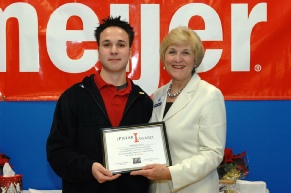 Anthony Perez - On August 15, 2009 while in the parking lot of his employer, (Meijer's - 130 S Gary Ave), Anthony witnessed a motorcyclist pull into the Meijer's parking lot with a mechanical failure, which led it to catch on fire while the passengers were still on board with one passenger engulfed in flames.  Anthony immediately ran to the scene, removing his shirt in an attempt to smother the flames.  When that did not resolve the matter, Anthony pulled the burning clothes off the victim and was able to extinguish the fire before the Fire Department and Paramedics arrived on the scene.  Anthony's heroic actions uniquely represent the Pillar of Caring.  View the Channel 7 News Video: http://abclocal.go.com/wls/story?section=news/local&id=7177353 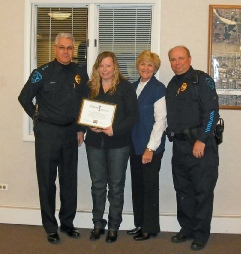 Lake Park JV Football Team - At the September 12, 2009 JV football game between Lake Park and Elgin High Schools, Lake Park coaching staff became aware of Elgin player #80, who has severe autism and received little playing time.  Lake Park coaches offered to run a special play that would allow player #80 to receive the ball and to then be gently pushed out of bounds.   Lake Park named the play "Driver-Driver", after the Green Bay Packers' wide receiver Donald Driver. During the play, Lake Park JV football players further called an audible to refrain from tackling player #80, whereby allowing him to run 67 yards to score the game tying touchdown.  In the picture to the left, the Elgin football player #80 and the Lake Park assistant coach Nana Agyeman acknowledge the crowd's chants of "coop, coop, coop!" as player #80 (Winfried Cooper) crossed the field to thank Coach Agyeman and the Lake Park JV Football team for offering him the chance to score a touchdown. The Coalition determined that the selfless actions of both the Lake Park High School coaching staff and JV Football players uniquely represent the Pillar of Caring.  View the Daily Herald video:  http://link.brightcove.com/services/player/bcpid18011347001?bctid=41503635001 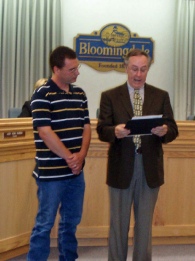 Tim Grant - While engaged in work for the Bloomingdale Forestry Division, Tim observed a small boy wondering through the work area wearing no shoes or coat, and not accompanied by an adult.  Tim acted to console the young boy, and summoned the Police Department.  After the police responded, Tim accompanied the anxious youngster back to the Police Station so that his identity, residence and contacts to his parents could be made, and then further accompanied the boy back to his residence and into the arms of his grateful parents.  Tim Grant's selfless concern, caring and compassionate acts uniquely represents the Pillar of Caring. (Pictured right: Tim receives his award from Mayor Iden)

Arsalan Bin-Kamran - At approximately 5:15 pm on April 27, 2009, 12 year old, Arsalan Bin-Kamran was walking along South Brandon Drive in Glendale Heights (Bloomingdale Fire Dept. District) when he noticed a fire in the garage at 1953 South Brandon Drive. Arsalan knocked on the door to alert residents then he called 911 for assistance.  Because of Arsalan's swift actions, damage to the home was contained mostly to the garage and the exterior of the home. Without Arsalan's help, the house would have sustained considerable damage were the fire to go undetected or unreported for much longer.  Arsalan's act uniquely represents the pillar of Citizenship. 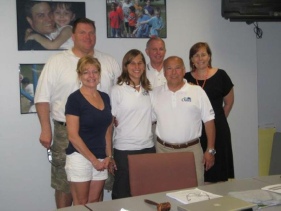 Jamie Meyer - Utilizing her training as the Recreation Supervisor and Lifeguard Trainer for the Bloomingdale Park District, Jamie witnessed a tragic motorcycle accident and jumped into action as a first responder on the scene.  Finding that the victim was not breathing, she began CPR until she was subsequently joined by three other Good Samaritans who helped work on the victim until the paramedics arrived.  Sadly, the victim ultimately passed away; he was a young man, an Iraq veteran and father of 15-month old triplets.  Jamie's act bravery and selflessness uniquely represents the Pillars of Caring and Citizenship. (Pictured left: Jamie receives her award from the Bloomingdale Park District Board) 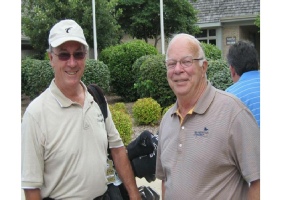 Don Helmig - As the General Manager of Bloomingdale Golf Club, Don has hosted the annual CHARACTER COUNTS! Coalition's recognition breakfast for as long as it has been in existence, refusing compensation for both the food and service provided.  Don's commitment to the Coalition uniquely represents the pillar of Caring. (Pictured Right: Don Helmig with Mayor Iden). 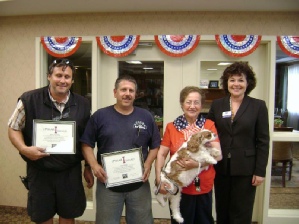 Gary Harding & Tom Sieler - On May 20, 2009 Gary Harding from Andy's Lawn Maintenance and Tom Seiler of Seiler Remodeling were in the Old Town Bank and Trust parking lot, when Janet Jacob (a resident of Alden Senior Living) was walking her small dog by the Lake Street entrance.  Suddenly, from out of nowhere a large Rottweiler pounced on her 18lb dog, and all she could do was scream.  Hearing her scream, Gary & Tom ran across the 4-lane Lake Street and grabbed and pulled the Rottweiler off her dog and held it until the owner came to take it away.  They called the police and gave them of the description of the owner and dog.  The brave actions of Gary and Tom uniquely represent the Pillar of Citizenship.  (Pictured left: Gary Harding and Tom Sieler receive their Awards from Janet Jacob and Christine Smith, Coalition Treasurer.) 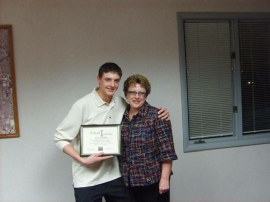 Trevor Koehn - In recognition of his student leadership in the National Young Leaders State Conference, Trevor received an invitation to the Presidential Inauguration.  Trevor's commitment to leadership and the community uniquely represent the Pillar of Citizenship. (Pictured right: Trevor receives his award from Donna Marino, Westfield Middle School)